Apple unveiled its new Pro Display stand and the price tag may surprise you.
USA TODAY

“I’ll be hanging onto my iPhone 6 Plus until grim death,” says the radio production manager from Gainesville, Georgia.  One grand “is just too much money for what you get.”

Wilson is in ample company. This week’s earnings reports for Apple and Samsung both showed a clear trend: consumer resistance to the ever-growing high prices of premium smartphones. 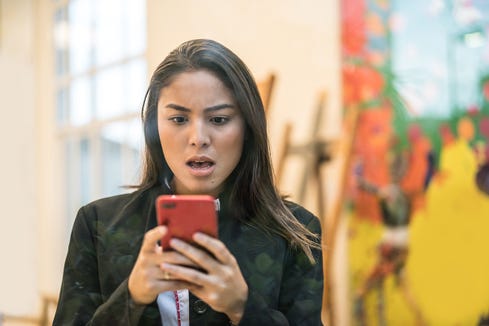 In quarterly earnings announced this week, Apple’s iPhone revenue declined 12% to $26 billion from $29 billion in the year-ago quarter, while Samsung blamed “weak sales momentum” for the Galaxy S10. Angelo Zino, an analyst with CFRA Research, says Apple iPhone sales will tumble 15% in the current fiscal year.

On Wednesday, Samsung is set to unveil its latest smartphone, a new edition of the Note, which currently sells for between $799 and $999.

So good luck with that, Samsung.

You are outta your damn mind if you’re going to get me to pay more than $300 dollars for a smartphone. Even at $300, I’ll just consider hanging onto whatever old device I have that still works. https://t.co/HtHIHbeaDP

Apple got additional bad news this week when President Donald Trump announced new tariffs on China imports that would include the iPhone since it’s assembled in China with mostly Chinese parts. This would add $75 to $100 to the price of an iPhone, predicts Daniel Ives, an analyst with Wedbush Securities.

So why have premium smartphones stumbled? Consider a variety of factors:

—We like the new and improved cameras, but for the majority of the world, selfies and food shots taken on an iPhone 6 won’t look that much different from those snapped on an iPhone XS. The software update tools Apple releases every year make the cameras and photo management in general better, and the update is free. Apple is expected to release the latest update, iOS 13, in September.

Wilson will find himself in ample company, then as when the iOS 13 update is released, as it will only work with phones from the 6S (first introduced in 2015) and up. Sure, the 6 Plus phone will still function, but it won’t get software updates or the new features Apple will be introducing for iPhone users, like Dark Mode, an all-new look to Maps and improved photo management.

Apple hopes Wilson will be so inspired by the new features, he’ll run out and buy a new edition iPhone. Apple is expected to release three new models in September, all at the same price points as the 2018 editions, $749, $999 and $1,099, according to analysts.

The best deals, however, are for used (or, as Amazon now calls the category, “Renewed”) editions. An Apple iPhone 8, first released in 2017, sells in the $250 to $300 range on various websites. Add the new battery, and you can get a fast phone, with a great camera and the latest software, for a steal.

The Galaxy phones from just a few months ago have already seen a big price drop, at $549 (down $200) for the S10e. Better yet, pick up the S8, also from 2017, also in the $300 range, and you get a fast phone with an expandable memory slot, which also negates one of the reasons people ditch their phones. They ran out of room. Pick up a hefty 32 GB memory card for $20, and you’re set.

Of course, more consumers than not were happy to pay the big bucks and get the latest and greatest. Ross Kestin of Manhattan Beach, California recently formed over a grand for a Samsung Note 9 “and so far I think I’m getting my moneys worth. This Galaxy Note 9 is phenomenal.”

New or used? I’d love to hear from you. Please join the discussion on Twitter, where I’m @jeffersongraham.

In other tech news this week

Another week, another massive data breach. This week, it was Capital One bank, and just, 100 million accounts. ICYMI, here’s how to protect your data.

Sonos and IKEA teamed up for a new product line of stylish speakers and a lamp that doubles as a stereo. We took both out for a test spin this week.

Ancestry.com introduced new tools to find relatives who were displaced in the Holocaust.

e-Scooters have got to go.

Credit Hack – what to do?